People who live and work 9,000 feet above sea level in Colorado’s ski-resort towns have long paid more for health care than almost anyone in the U.S. For years, local leaders from Summit County, home to the slopes of Breckenridge, decamped to Denver to plead for relief.

The annual journey to the capital became a discouraging pilgrimage for Tamara Drangstveit. As executive director of a nonprofit that helped people sign up for health coverage, she watched premiums gobble up more of household budgets every year. From 2015 to 2019, the cost of a midlevel health plan for a single 40-year-old in Summit County more than doubled to $606 a month, 34% above the national average.

The high prices are common in parts of the U.S. that are served by just one hospital, a situation that prompts some residents to drive more than an hour in search of cheaper care, even for simple procedures.

The people of Summit County, working with a forward-thinking state insurance commissioner, figured out a way to change all that. Colorado Governor Jared Polis announced plans on Thursday to replicate it statewide. What they did to bring prices down could be a model for reining in spiraling costs across the U.S., a goal that has proven elusive in Washington.

Number of hospitals within a one hour drive 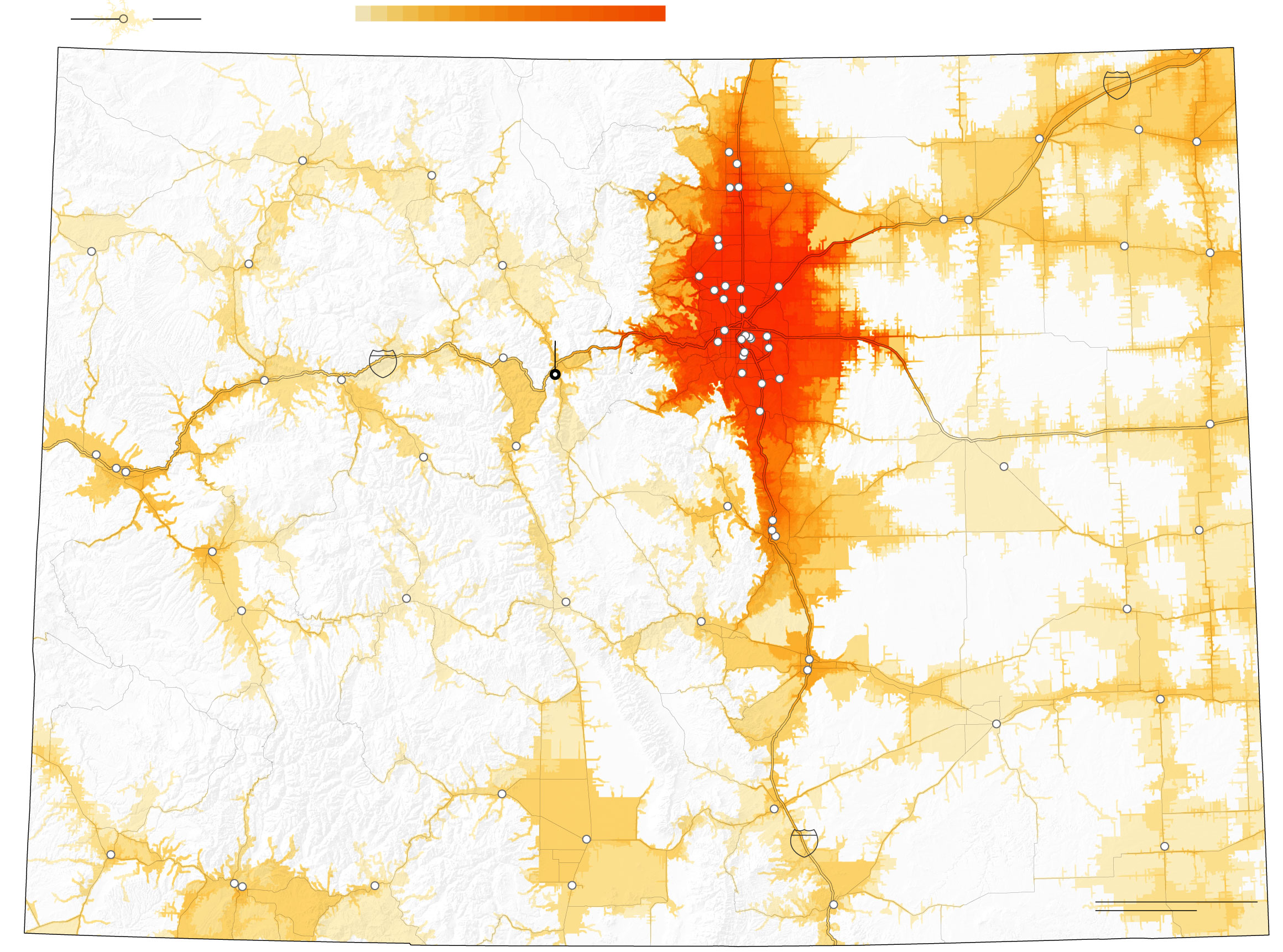 It wasn’t easy, or fast. Drangstveit, 42, recalls past insurance commissioners fleeing when she approached to talk about costs. “They would literally turn around and walk the other way,” she said.

That changed in January 2018. Drangstveit appeared on a “Pizza and Politics” panel discussing health costs at a community center in Frisco, a town of about 3,000 between the mountains and the Dillon Reservoir, which supplies much of Denver’s water. Next to her sat Michael Conway, 39, freshly appointed as Colorado’s interim insurance commissioner by the state’s Democratic governor.

“The room was angry,” Drangstveit said. A new year had brought another round of premium hikes.

After the event, Conway didn’t walk away. “He let us beat up on him some more,” Drangstveit said, “and then he gave us his cell phone and said text or call me any time and I will come back with a strategy for you.”

The discussions that followed led to an initiative set to reduce premiums by as much as 20% next year in Summit County, according to the Peak Health Alliance. That’s the name of a newly formed group of employers who have banded together to negotiate directly with the local hospital and insurance companies.

Peak Health will represent about a fifth of Summit County’s 31,000 year-round residents. It will include workers from large government and private employers, small businesses, and individuals, creating the bargaining power to drive down health-care prices.

“We can be successful where maybe insurance companies have struggled,” said Drangstveit, who will lead Peak Health as executive director.

Individual Insurance Prices Have Doubled Since 2015

Note: Prices shown are the lowest-available silver plan monthly premium for a 40-year-old without any federal subsidies.
Sources: Connect for Health Colorado and Colorado Division of Insurance

The U.S. spends more on medical care than other countries mostly because prices are higher, not because Americans use more services or because care is superior, according to economists who study health spending. Further, employers often don’t have a good sense of what their health plans pay for services and how that compares with the market.

That secrecy creates disparities. A recent Rand Corp. study found average prices paid by commercial health plans to hospitals vary from 150% to 400% of the rates paid by Medicare, the government health insurance for older Americans.

Rand analyzed data from 1,600 hospitals in 25 states and found big differences in prices negotiated by health plans. For outpatient CT and MRI scans, prices varied from slightly under what Medicare pays to 15 times Medicare rates—ranging from $72 to $1,111.

In Colorado, Summit County’s lone hospital stands out. At St. Anthony Summit County Medical Center, they paid $876 on average for the scans—11 times what the hospital would have gotten from Medicare.

Summit Medical Center’s Prices Are Among the Highest in Colorado